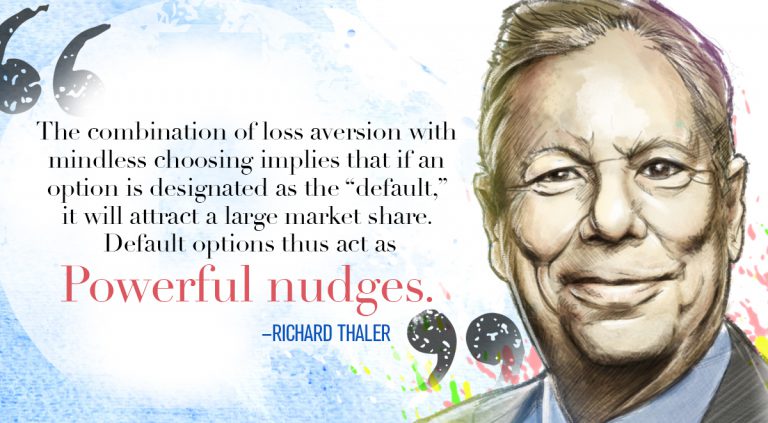 Think back to that microeconomics class you took in college, and you may remember that elusive concept: the “rational man.” According to economic theory at that time, people made purchasing and investment decisions rationally. The only problem is – they don’t.

If they did, everyone would save enough money for retirement, no one would take on more student loans than they can comfortably pay back, and there would be no state lotteries because the chances of winning are just not high enough to rationally justify the investment.

Enter Richard Thaler, this year’s Nobel Prize winner for economics, and co-author of the best-selling book Nudge: Improving Decisions about Health, Wealth, and Happiness. Thaler believes that people make decisions with consistent irrationality. People can tell you today what they are going to buy, and tomorrow they buy something different. After the fact, they can say to you in detail why they purchased something, although, in fact, they don’t know.  So, if the construct of the “rational man” is wrong, how do we explain how consumers make decisions – and how do businesses take that into account in marketing, sales, and customer experience (CX)? While the application of behavioral economics to marketing is relatively new, here are three examples of how businesses might use these principles to influence buyer behavior:

“If you want to influence behavior, spend less time making arguments and more time removing friction and other barriers.”

“Giving an immediate reward, even very small, is more effective than expecting customers to wait for a longer-term reward.”

So where does behavioral economics leave us regarding understanding customers? Keep in mind that people don’t behave rationally, and probably cannot tell you why they act the way they do. Marketing research techniques for understanding customers are still valid and valuable but don’t forget to include experimentation, testing, and observation of consumers. And expect the unexpected!